Jigsaw Homes Group has joined housing providers across the region set out ambitions for building 16,000 homes over next five years.

Ambitious plans to help tackle the housing crisis across Greater Manchester have been revealed in a manifesto by a consortium of the region’s housing providers. 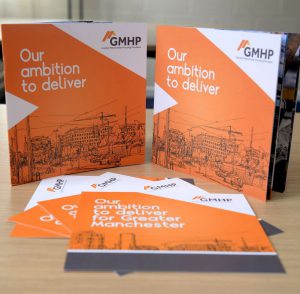 The Greater Manchester Housing Providers (GMHP), a group made up of 25 housing organisations, have set out how they plan to help meet the city region’s housing need of providing 227,000 more homes over the next 20 years.

Its ‘Ambition to Deliver’ pledge is focussed on building more homes, taking into account the unique and varied challenges faced by the North West, including the need for providing extra care support and tackling homelessness.

Building around 500 homes each year, the joint venture will deliver the variety, types and quality of new homes needed for the region’s communities.

The manifesto was presented to a special Greater Manchester All Party Parliamentary Group (APPG) meeting, organised by DevoConnect and chaired by Lucy Powell MP on Friday (20 July, 2018.)

The APPG was convened specifically to discuss and debate among Greater Manchester’s leaders how to meet the region’s housing challenges and was attended by City Mayor of Salford and housing lead for Greater Manchester Paul Dennett, along with other senior representatives of the housing and construction industries.

In the manifesto , GMHP say they will build a further 16,000 homes in the next five years – adding to the 8,000 homes they have built in the last five years- by working in partnership with all public sector agencies to look at new and equitable ways to free up and allocate land to housing providers for affordable housing.

This will aim to help the region meet the target of 227,000 new homes needed by 2035, which was set out as part of the devolution agreement with the Government and brings with it the opportunity to explore potential sites for new homes, employment opportunities and transport links to help the city to grow.

Other commitments made in the manifesto include tackling homelessness and roughsleeping by working with private rental sector landlords; and building on the £1.2bn GMHP providers contribute to the region’s economy by investing in more than 1,000 new apprentices.

It also aims to ease the pressures on health and social care and the £1.3bn poor housing costs the NHS each year, through measures to help older people to live independently for longer.

Chair of the GMHP, Jon Lord said: “This manifesto sets out our ambitions to play a major role meeting the key challenges facing the region and putting Greater Manchester at the forefront of tackling the country’s housing crisis.

“One in five people in Greater Manchester live in a GMHP home, and we have already led the way in meeting the complex housing needs of the city region; building 8,000 homes in the last five years, supporting around 2,000 residents into work each year and providing homes for all types of needs, from new family homes to extra care schemes and refuges for domestic violence victims.

“With the help of public and private sector partners, together with new and equitable access to land, housing providers in Greater Manchester are determined to face this head on in our region’s inimitable style, leading the way with new and innovative solutions. Working together, we have the capacity, determination and infrastructure to deliver this.”

Hilary Roberts, Chief Executive of Jigsaw Homes Group said: “We’re proud to be involved in this partnership to build much needed homes across Greater Manchester and, as the newly-formed Jigsaw, we can provide even more homes with properties for affordable rent, sale, shared ownership and private rent.”

To find out more about the plans, take a look at the following video:

Greater Manchester Housing Providers house one in every five people across the region, owning more than 250,000 safe, decent and affordable homes and have built more than 8,000 new homes in the last five years. Made up of 25 housing providers, we contribute £1.2bn in GVA to the Greater Manchester economy and support more than 28,000 full-time jobs across local communities.

You can find out more about GHMP by visiting their website at: www.gmhousing.co.uk or following them on Twitter @gmhousing.